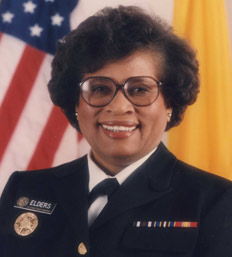 Joycelyn Elders, the first person in the state of Arkansas to become board certified in pediatric endocrinology, was the sixteenth Surgeon General of the United States, the first African American and only the second woman to head the U.S. Public Health Service.  Known as an outspoken advocate of public health, Elders was appointed Surgeon General by President Clinton in 1993.

While serving as Surgeon General, she campaigned for clinics and expanded sex education; she caused a storm of controversy among conservatives and some religious groups. Yet, largely because of her lobbying, in 1989 the Arkansas Legislature mandated a K-12 curriculum that included sex education, substance-abuse prevention, and programs to promote self-esteem. From 1987 to 1992, she nearly doubled childhood immunizations, expanded the state’s prenatal care program, and increased home-care options for the chronically or terminally ill. Although she served for only 15 months her impact in history will last forever.

Resilience and dedication is why we salute Dr. Elders. Although she came from very humble beginnings in rural Arkansas, she surpassed the dreams she imagined for herself. Dr. Elders is my inspiration to do more, be more, and dream bigger! My aspirations to one day serve my country as Surgeon General is realized through Dr. Elder’s accomplishments.